Looks like your email is already in our database!

Register today for IdliSoda 2023 in Chennai

Music appeals to the mind, nourishes the senses, evokes the deepest feelings in the heart and sometimes takes you into bliss. Music permeates the self and goes beyond religion, caste, creed and unites every soul to its truest self. When such is the power of music, it’s only natural that Rotary that has involved itself in healing the world through service and is also beyond religion caste or creed should have a music festival. The ethos is the same, healing is the intent and making lives better, the motto. It’s a FUSION of belief’s, faith, behavior, and life. Rotary Club of Madras East presents you “IDLI SODA”, the Madras Fusion Music Festival. 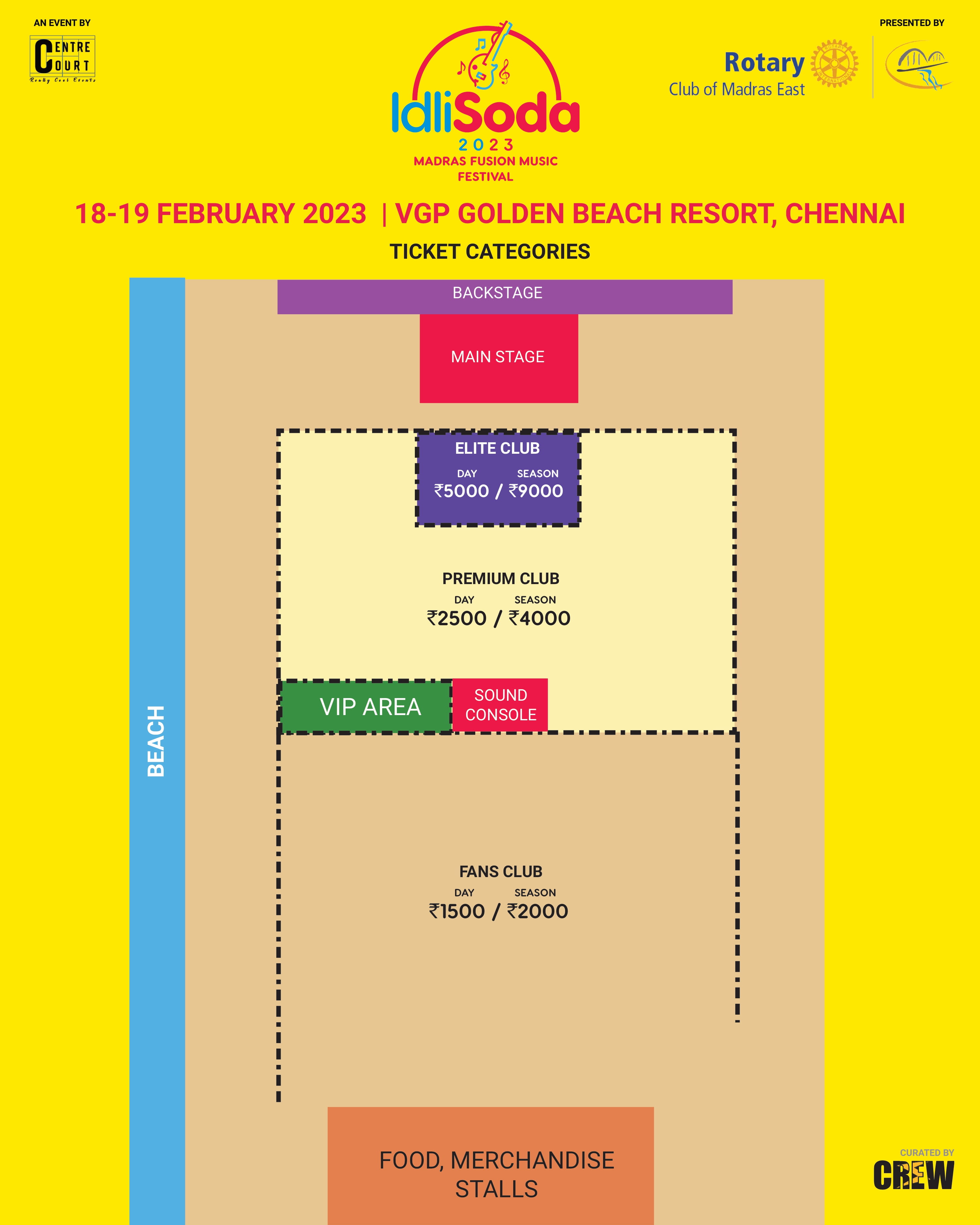 • The event is restricted to children under 12 years of age.
• All ticket holders will be given a coloured wristband based on their ticket denomination, at the venue. Entry into the concert area will be dictated solely by this wristband only.
• The wristbands are non-transferable and persons with tampered or torn wristbands will be denied entry.
• Unlawful resale (or attempt to resell) of a ticket is strictly prohibited and punishable under law.
• No refund on a purchased ticket is possible, even in case of any rescheduling.
• The event is subject to government permissions. In case the permissions are not granted and the event is canceled, a full refund shall be issued to all patrons.
• Artist line-up and billed attractions may be subject to change.
• Organizers reserve the Right of admission to all ticket holders.
• Consumption and sale of illegal substances are strictly prohibited.
• The following will not be allowed inside the concert premises:
◦ Professional cameras and/or any form of recording instruments
◦ Arms and ammunition, drugs and alcohol
◦ Knives and other sharp objects
◦ Outside food and beverage
◦ Pets and animals
• Organizers reserve the right to perform security checks at the entry point. The organizers also reserve the right to deny any ticket holder entry if they are found to be bringing unauthorised materials or substances into the concert arena.
• Organizers or any of its agents, officers and volunteers shall not be responsible for any injury, damage, theft, losses or cost suffered at or as a result of the event or during any part of it.
• Parking near or at the venue premises is at the risk of the vehicle owner. The Organizers shall not be held responsible for any damage or theft of any vehicles within the stipulated parking premises of the venue.
• Organizers are not responsible for any negative effects of food or beverage items consumed at the venue by guests.
• Any disputes will have to be settled under Chennai jurisdiction courts only.
• The holder of this ticket hereby grants organizers the right to use, in perpetuity, all or any part of the recording of any tape made of holder’s appearance on any channel for broadcast in any and all media globally and for advertising, publicity and promotion relating hereto.
• The organizers reserve the right without refund or other recourse, to refuse admission to anyone who is found to be in breach of these terms and conditions including, if necessary, ejecting the holder/s of the ticket from the venue after they have entered the ground.
• Internet handling fee per ticket may be levied. Please check your total amount before payment.
• It is mandatory to follow all government rules and regulations to prevent the spread of Covid – 19. Strict checking will be done before entry. Guests need to fully cooperate with the staff.

This event is organized by - Rotary Club of Madras East

Your Jini login gets automatically created. You can activate it once you complete your transaction.